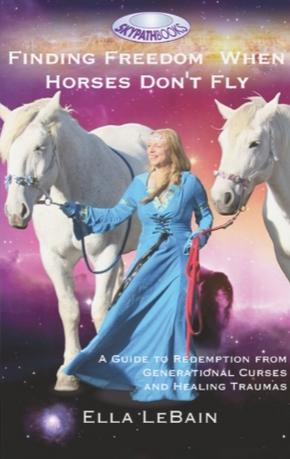 Ella LeBain is an International Deliverance Minister and a member of ISDM (International Society for Deliverance Ministers). She was born in New York City, educated in Israel where she learned and read the Bible in Hebrew.  She graduated with a Social Sciences Degree and then spent two years in South Africa as a missionary for the Assemblies of God.  After returning to New York City, she grew disenchanted with New York's churches which she perceived as a spiritual graveyard. So she strayed into New Age circles which lead her years later into what she calls a 'spiritual trainwreck', culminating into intense spiritual and legal battles over her very life and soul, causing her to return wholeheartedly to her first love and Savior Jesus Christ, who in His Grace redeemed her and opened her eyes to the reality of spiritual warfare, spiritual legal ground and taught her to discern between spirits.

Ella LeBain is the author of a book series on the End Times Mass Deception,  Who's Who In The Cosmic Zoo? A Spiritual Guide to ETs, Aliens, Gods & Angels: An End Time Guide to the Mass Deception.  www.whoswhointhecosmiczoo.com

Ella LeBain is a Jewish believer in Jesus Christ . After immersing herself into the teachings and ministries of Biblical Foundations of Freedom, she became liberated from a string of serious health and emotional setbacks, and generational curses. She presently lives happily in Colorado with her husband, daughter and three fur kids and serves as a Prayer Warrior, Prayer Counselor and Deliverance Minister for the Kingdom of God where she shares in the path to Freedom, Healing and Empowerment through the Holy Spirit.

Ella will be releasing her new book "Finding Freedom When Horses Don't Fly - A Guide to Redemption from Generational Curses and Healing Trauma" in 2020, which will contain all the information explaining the Biblical Reason for Spiritual Legal Ground along with applicable healing prayers from the workshops.